I measured an acceleration spectrum of a washing machine with phyphox(Physical Phone Experiments).

I recorded the vibration of the washing machine below when it’s in dehydration process.

1. The pictures below show the procedure to record an acceleration spectrum with phyphox. In the last picture, I typed my email address to receive an Excel data file with email. 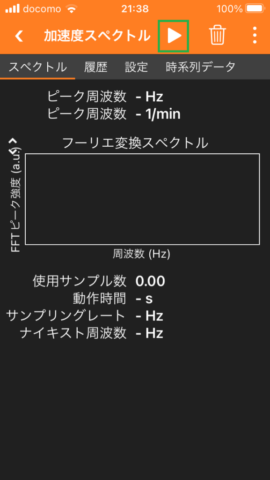 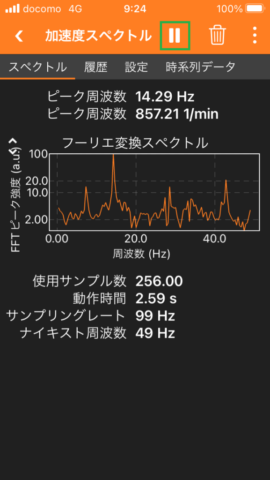 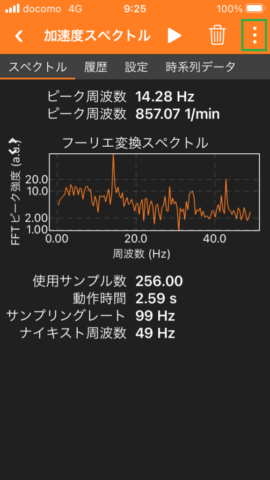 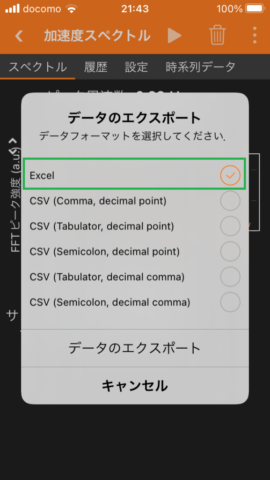 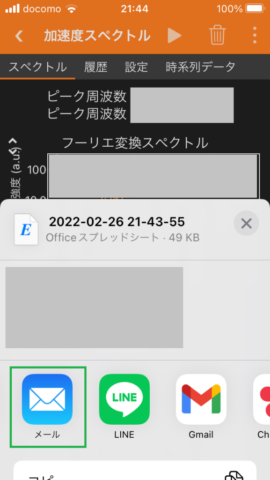 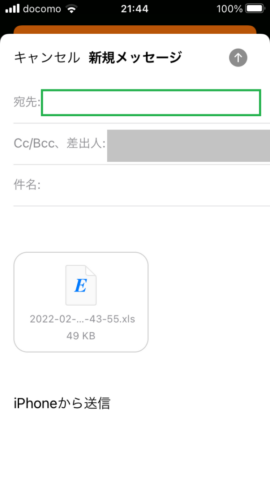 2. The screenshots below show the recorded data. I recorded the data when the rotation speed of our washing machine had the highest value.

The accelerometer data are measured at time intervals of just over 0.01 second (99Hz). The maximum frequency of vibration (Nyquist frequency) that can be measured is 49Hz, half the sampling rate of the sensor data (99Hz) .

The operation time is shown as 2.59 seconds because the number of samples used is 256 and the time intervals for sampling are about 0.01 seconds. Using the 256 samples of data from the past 2.59 seconds as input, the magnitude of each frequency component is calculated with FFT (Fast Fourier Transform) algorithm.

As you can see in the third image, you can also change the number of sampling data used in FFT (Fast Fourier Transform). The larger the number of samples, the better the frequency resolution (finer intervals between the frequencies on the horizontal axis). However, it takes more time to acquire and update the data. 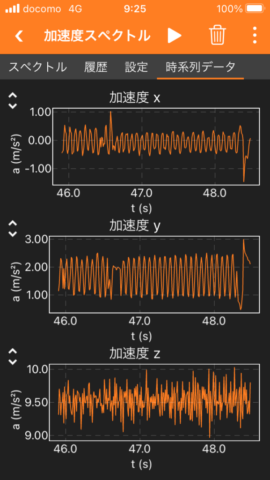 3. I plotted the Excel data exported from phyphox with Google Charts.

In the figure below, the horizontal axis is the elapsed time from the start of measurement and the vertical axis is the peak frequency. The peak frequency of the washing machine vibration was about 10 Hz at 5 seconds after the start of measurement because the rotation speed was about 10 Hz. The rotation speed gradually increased to about 14 Hz after 30 seconds.

The following JavaScript was used to plot the two graphs in section 3.

Note:
The Excel data exported from phyphox has been uploaded to Google Sheets in the same way as in this Blog.
When plotting the Peak History graph, the gid parameter is added to the end of the sheet URL, as in &gid=176809578, to refer to a sheet other than the first sheet.(I referred to this page.)